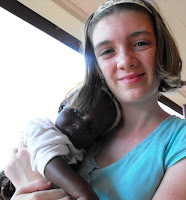 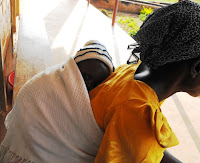 About a month ago a Jaja (grandmother) brought her twin grandchildren to GSF. The twins are 18 months old and were very malnourished. They have a sister who is 5 and a brother who is 3. The twins and their Jaja were taken to a hospital to see what was wrong besides malnutrition. They did not find anything wrong and the twins were sent home. The probation officer along with GSF’s social worker went to their house to investigate. It was decided that the GSF youth age 12 and up would go to the village to help the Jaja cleanup around her house. In all there were 25 people (19 youth and 6 adults) who went to help that day. It seems like a lot of people just to cleanup a house but, there was no shortage of work. Everyone jumped in and did things such as, wash a lot of clothes and the few dishes they had; bathe, dress, and play with the kids; dig around the house; patch holes in the walls; take everything out of the house to sweep mop and re-organize; and sorting rice. The pictures above are from the day their Jaja brought them to the clinic. The ones below are from when we went to their village. 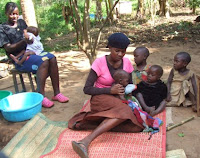 Rebecca with one of the twins 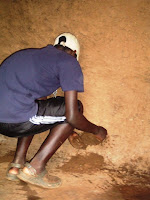 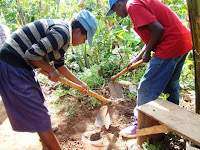 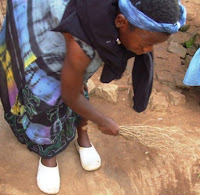 The four kids after they were bathed and put in new, clean clothes :)

In Uganda all twins are named: Babirye - oldest girl; Nakato - youngest girl; Waiswa -oldest boy; and Kato - youngest boy. These twins are Babirye and Kato ... the girl above is an oldest twin so also a Babirye. I love this picture of the two 'Babiryes'. 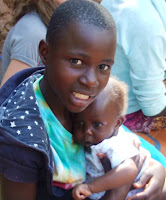 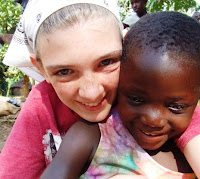 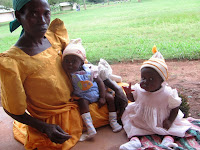 Little Kato was sick yesterday so they came back to the clinic - he has Malaria. These two pictures were taken yesterday. 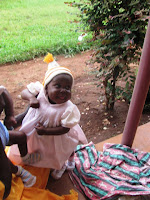