I know .... my last 4 posts have been current happenings and not catch up posts but I was a bit tired of catch up posts.  They were taking a bit too much work for me to remember what happened way back then.  Don't worry though, I'm not finished with catching up.  All though there may be a few things I won't be able to write about.  I'm ready now to write about this one.  Simeon.  Sorry it's so long. 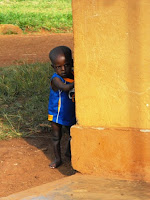 Little Simeon was born in September of 2009 … the same time we were on furlough.  As one of the teen girls (who was very close to Simeon) said when I first met him, ‘When you left Simeon was not born, but now … he is born!’  As he grew up it became obvious he was not on track.  By the time he was a year old other boys his age were walking … or at least standing up while holding onto things.  Not Simeon. 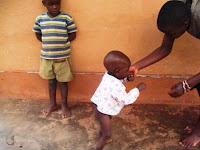 He was just barely crawling.  It concerned some nurses and missionaries, but his parents didn’t seem to notice much.  By the time he was about 1 ½ we knew something was wrong.  By that time he was walking but not very well or very far.  He was also really small for his age.  He hadn’t grown very much.  A woman who is a SPED teacher and comes to GSF a lot developed a relationship with the family.  She realized that something was not right and arranged for him to go to a doctor in Mbale (3 hours away).  When they took him there it became clear that it was probably some kind of heart issue.  They said they couldn’t do anything about it and referred him to a different doctor.  The parents were a bit hesitant about sending him.  Finally, they made an appointment for him.  Simeon didn’t make it to the appointment.  As I am writing this I am seeing a whole new different light to it.  I see that Simeon had fulfilled God’s plan for him on earth.  Jesus wanted Simeon home.  It was his time. 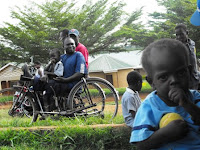 I didn't want to believe that something was actually wrong.  Maybe it was because at the end of 2010 and the beginning of 2011 my heart had suffered so much pain from losing three people who  I loved so much ... people who didn't live long enough ... who I thought there was more for.  But, there wasn't ... they fulfilled the maker's purpose ... Simeon fulfilled the maker's purpose.  I wasn't that close to Simeon since he wasn't exactly a GSF kid.  But, I felt myself growing closer since he lived on the compound.  I didn't want to think that we could lose him.  I remember on Thanksgiving (Thursday) I thought we were having choir practice so, I went down to the Chapel after a really busy day (50 visitors at GSF).  It turned out we didn't have practice for choir until late in the evening.  Until then the bridesmaids for Isaiah's wedding were having practice.  I stayed and watched. Big David (Simeon's dad) had come with his boys.  I watched him as he toddled around the church.  I watched him as he ran walked a fast as he could away from most people.  I tried to carry him, but he was scared of me.  He let me hold his hand and play with him while he was on his daddy's lap.  I remember thinking that night 'He's gonna make it.'  I then caught myself and thought, 'Of course he's gonna make it he's perfectly normal.  Just delayed.  Why would he not make it?'  What I didn't want to think the whole time had obviously buried itself deep down in my heart.  Now, it was coming out and contradicting itself.  (Did that make sense?  I am having a hard time wording this.)  As I sat there in the church surrounded by others who had come thinking there was practice, with rain pounding on the tin roof, no ceiling to reduce the noise, I thought, 'why am I thinking all of this?'  Maybe it was the spirit preparing my little heart for what was about to happen. 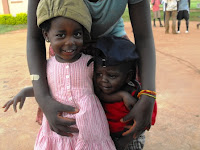 The next day was the Introduction for Isaiah and Norah (it's kind of like a wedding party - bigger than the wedding itself).  I went to the gate with everyone to see the bus off.  I walked back, surprised to see that Big David was still at GSF.  He had been so behind this whole thing.  Yet, they had had a hard time raising all the money so, only few people were invited to the introduction.  Big David wasn’t at all disappointed though.  He didn’t mind about the introduction part, as long as he could go to the wedding.  And we all thought he would be going.
…. But God had different plans … 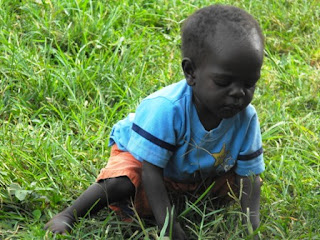 The next day I woke up very excited.  I won’t tell you all that happened that day because that will be in a totally separate post.  Around 8:30 (I really have no clue what time it was and honestly the schedule is all mixed up in my brain) my dad got a call from Big David saying that Simeon was having a hard time breathing.  I couldn’t fathom this – he had been doing wonderful just a few days before.  They piled into a car with a driver who had just been going to the hospital.  I think what happened next was we walked with the girls who were going to be bridesmaids to find earrings because I remember talking about Simeon being sick.  When we got back home Auntie Betsy called … Simeon was gone.  Wrapping my head around this fact was extremely hard.  No one really gathered the kids together to find out … the word just spread.  I walked down to the chapel where all the teens were.  I knew this would hit them hard.  I’m pretty sure it was the woman who cleans the church who told them.  They obviously couldn’t comprehend it either.  Big David and Stella (his wife) came back from the hospital with Simeon.  The next part was a bit too much for me to bear.  I couldn’t make sense of any of it.  I walked down to Big David’s house and people were crying everywhere.  I walked over to where I could see into the door, but there were way too many people in the tiny house and doorway for me to fit in.  All the burials I've been to here have been in the village and have been Ugandan style, but I've never been there when it all happens like this.  It's so weird and just doesn't make much sense.  I could hear Safina (church cleaner) crying and saying something that sounded a bit like a chant that was making absolutely no sense.  Little Josiah, the four year old brother, was sitting on the couch staring at the now lifeless figure of his brother who had been laid on a couch cushion on the floor.  I couldn’t take it.  It was too much.  Death is so raw here.  I talked with those around and heard this many times ‘He looked dead when I saw him this morning BEFORE they went to the hospital.  When Big David told the story it became even clearer … Simeon was dead before they went to the hospital.  They had hoped the hospital could do something for him, but nothing was to be done.  His life was over.  Jesus called him home.  It was time for him to see his creator.  The one, who created him perfect in his eyes, even though he was never the same as the other boys his age, was ready for him to go home.  God called Simeon home … we had to stand back in awe of him and His works.  God had a reason to call Simeon home … we only have to see if maybe it could be to save a life here on earth … could we be a part of that?
Note: Simeon died in November 2011.  Sorry if that was not clear.
Here are more Simeon pictures.