There are nine Special Needs Kids at GSF. Two of them make me sad when I'm around them. Tom and Rosie are both very special to me - I will never forget them.

Tom is about four years old now. The way Tom spends his days is not the way anyone would choose to live or should have to live. Tom spends most of his days wandering around the house or laying on the couch, and chewing on his shirt. He cries all the time - when they put him to bed, when they bathe him, when they put him on potty and just about any other time. When he eats a lollipop he licks his fingers and then touches the lollipop over and over again. He does that sometimes with his milk too. His life is so sad but who knows if he's ever known another way of life. 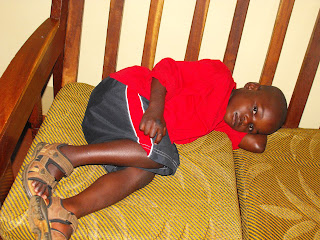 Tom laying on the couch. 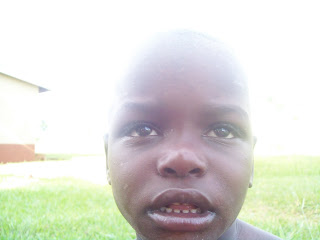 
Rosie is almost nine years old. She came to GSF when she was seven. You would have never guessed that she was seven. When Rosie was two years old she got either cerebral malaria or meningitis. After that she has never walked again, she never told anyone anything again, and her world became a dark one where she could never see again. When Rosie came she was very malnourished. Every bone in her body was tight her fists were clenched. She literally was and is living a life of fear. Every time you touch or move her, she cries. Slowly with many people working with her and helping her patiently and persistently and with the grace of God her hands are opening. Rosie is still a long way away from being a normal - or even almost normal - little girl, but God has brought her a long way and he can bring her even farther. 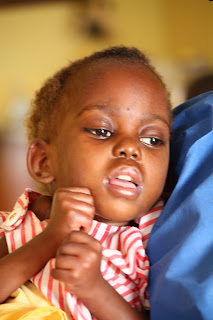 Rosie on her first day at GSF. 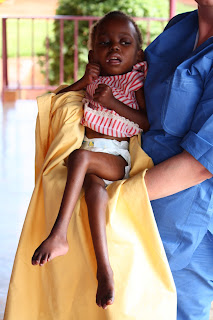 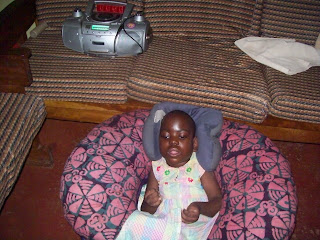 Rosie still lives life in fear but looks much better. 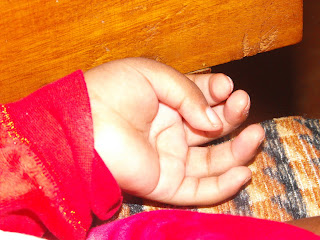