This week a youth team from Calvary Chapel in Florida came. They did lots of outreach in the local schools and I was able to go with them to all but one school.

On Monday, we went to Buikwe High School where the headmaster of the school was very funny and said some hilarious things. Here are a few of them. "This is Buikwe ... High ... School. Here we are high." While he was introducing everyone in his staff, he said the name of someone and then, "He's there in a half jacket" We looked and saw he was pointing to a man in a vest. Then, he called one of the girls on the team 'exotic and beautiful'. Then, as we were driving back we came upon a very rough road and had to turn around. Wow, that day seems like ages ago.

On Tuesday we went to a school called Victoria View. Not very many people spoke good English so we had to use a translator. Also, we found out that like half the school was Muslim so it was kind of difficult school. In the afternoon we went to Lord's Meade and saw lots of kids who used to live at GSF because that is where most of them go.

Then, on Wednesday we went to Hands of Grace. I think this school was my favorite. The first reason was because two of the kids who used to live at GSF, Juliet and Jonah, live there now. Juliet used to hang around our house a lot so it was great to see her again. Another thing that makes it stand out in my mind was that they also have a primary school. As we were talking to some of the kids I met a little girl named Janice. When I looked down at her legs I almost cried - they were covered with ring worms. I have four ring worms right now but she had a lot more and I can get the medicine for it and she can't. I keep praying for little Janice that God will heal those ring worms even though she probably doesn't have the medicine. Two other little girls I met were Natasha (who was like two years old) and a little girl carrying her around whose name was Dorrine. I carried Natasha till we had to leave.

The last school we went to was Allied Teachers Secondary School. The only thing I have to say about this school is that the team did their best performance there. Well done Calvary Chapel Team!

The team helped fund and paint a new playground. Yesterday, we had a party celebrating it's opening. There was face painting, and snacks for everyone. 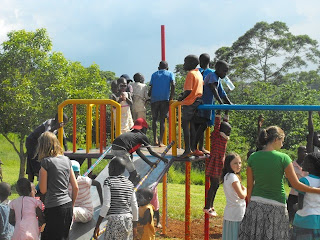 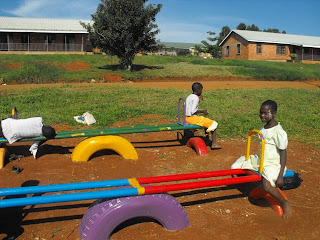 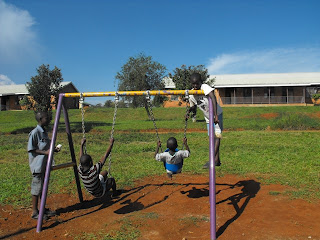 After that was over one of the little boys', Godfrey, grandfather came to visit him. Godfrey had had his face painted so when he walked in his grandfather got scared and asked 'What happened to his face?' 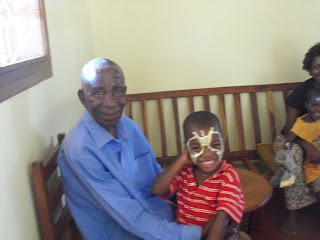 Today, we said 'good-bye' to the team. What they have done in Uganda will always be remembered.
Love, Caralina at 6:40 AM