A story of Grace and Martha 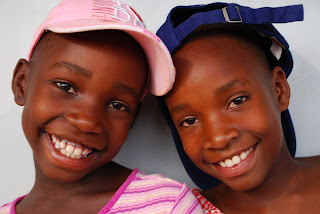 Grace and Martha are eleven year old twins. On the 27th of May their new family was granted gaurdianship of them. They were going to leave about a week later but the passport system was broken down. Finally, they got their passports and left GSF on Friday. That night they were sitting on the plane ready to leave Uganda. The only problem was the sat on the plane for 5 hours while the plane was under unexpected maintanance. Then, they were taken on a bus to a hotel where they stayed till Sunday night. They finally arrived home sometime yesterday! I am going to miss these girls forever. The many great memories I have made with them over the last three years will stick with me forever.
Love, Caralina at 6:32 AM