Yesterday, a new little boy came to GSF. His name is Sebastian and he is 1 1/2 but only weighs about 13 lbs. He was on the feeding program but he was not growing so he was brought to GSF. I first met Sebastian at a clinic in January. I remeber walking in the clinic and leaning down to the first baby I saw but that baby started screaming. Then, the lady sitting next to the mom said something in Luganda that I'm pretty sure meant "My baby's not afraid of Mzungus(white people)!" Because she said Mwana which means baby and Mzungu. So, I leaned down and talked to him and I don't think he screamed at me but he did look scared. That lady was Sebastian's Jaja (grandmother) and 'her baby' was Sebastian. Now, when I think back to those words I think 'Boy, was she wrong!' Sebastian now screams at most Mzungus he sees.

There is a sweet lady that cleans the toddlers' house every day who everyone calls 'Jaja' which is the Luganda word for grandma (her name is really Tabitha). She loves the kids and she has a really hard time saying 'Sebastian'. Barbara, who used to live at GSF and now works in the toddlers' and babies' houses thought this was really funny. Jaja would ask me his name and I would say 'Sebastian' and she would try to say it and Barbara would crack up! At one point Jaja leaned down to him and said 'Hallo, I'm Jaja. I love you, Sebasday.' Barbara and I could not help laughing and neither could Jaja. Today I walked up and Jaja was holding Seb and she asked me 'Caro, What is the name of this one?' So, I said 'Sebastian' and she didn't even attempt to say it that time, she just laughed. We call him 'Seb' or 'Seba' because a lot of Ugandans have a hard time saying 'Sebastian'. Seb is now in Jinja at the hospital because he was sick when he came. We pray that little Sebastian will grow up to be a healthy little boy at GSF! 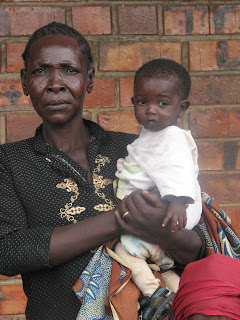 Seb and his Jaja while he was on the feeding program. 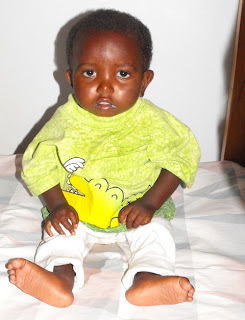 Email ThisBlogThis!Share to TwitterShare to FacebookShare to Pinterest
Tags: Sebastian, The begginning of a big story