I will proclaim the decree of the Lord: He said to me, " You are my son; today I have become your Father." - Psalm 2:7
There was a lot of excitement in our van as we pulled into a driveway in Greensboro, North Carolina.  Once we were inside, we gave hugs to the 6 kids who had been adopted from GSF, whether they remembered us or not.  Here we are with all six of the kids and their families. 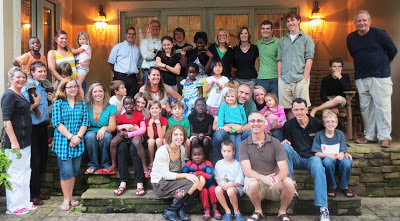 Godfrey, Patricia, Joyce, Zuri and Zeke, and Patricia and their families.  Also in this photo are 2 families who used to work at GSF, the Greers {adopted Patricia} and the Jacobsens; as well as a family in the process of adopting from GSF, the Van Camp family.

The next day, we pulled into another driveway where two little boys and a big dog came running out to meet us.  Pius and Brian were also adopted from GSF and live in the same town, but couldn't come the night before.  It was much too short of a visit, but it was soo good to see them!  {Sorry for the lack of a picture}

We then did some more traveling and after a few stops ended up in Knoxville where baby Favour lives.    Favour was still little when she left, so it was fun to see her walking around and all grown up.  She didn't really remember us, but we remembered her.  We also got to see Susanna who was an intern at GSF last year. 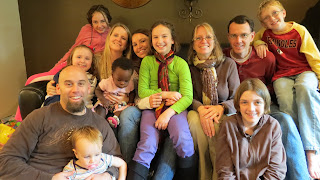 After A LOT more traveling, we finally got to Milwaukee and got to see Joann and Angel.  It was glorious to be able to spend some time with these sweet girls and their family.

And, with a lot of excitement, we finally arrived at the West house.  The West's have adopted twin 11 year old girls from GSF.  And, since we don't have a homeschool teacher this year {any teachers looking for a job in Africa?}, a fellow GSF Missionary {Auntie Claudia} sent her three adopted girls to go to school with them for a year.  We had a great time hanging out with them!  While we were there, we had one day that another  adoptive family was able to come hang out with us.

Auntie Claudia's girls are Hope on the far left, Emma in the very back on the right and Maggie in the red shirt, front left.  The twins are Grace next to me, second from left on the front and Martha, next to Maggie with a pink hair bow.  The other family adopted Layla, formerly know as Faith, on my lap and Samuel, formerly know as Aaron in the front middle.  The two others are Brice, who helped build our house and Meredith who was a nurse at GSF.

After we left their house at 7 pm one night, we drove to Iowa to stay with another family who adopted two kids.  We got there really late {around midnight}, so the kids were asleep.  The next morning, I woke up before the rest of my family, and headed upstairs, because I couldn't wait to hug those kids again.

My mom is holding Hannah Zai and I am holding Edi Caleb.  It was so good to see how they are growing up!
Towards the end of our trip we will be going to see two of the other boys.  Watch out, Team Clarke, it's gonna' be fun!
Then, there's Jimmy who we will not be able to see.  But, you know, when you live in Alaska, you can't expect to have visitors every day.  Here's a fun picture of him in his first snow blizzard.

Last, but not least, is Annett.  Annett is still in Uganda, but her family has legal guardianship of her.  They are going to pick up Visas on Friday and travel HOME on Sunday!  Annett gets to be home with her family for Christmas!!  Praise the Lord with us!!  You can follow along with their journey on their blog, here.

Glory to God for giving these precious children families!
Love, Caralina at 4:51 PM